There’s a new bucket list of places to hit in the Adirondacks. Not hiking trails or fire towers, but 16 places to get local beer, wine, cider, and spirits. 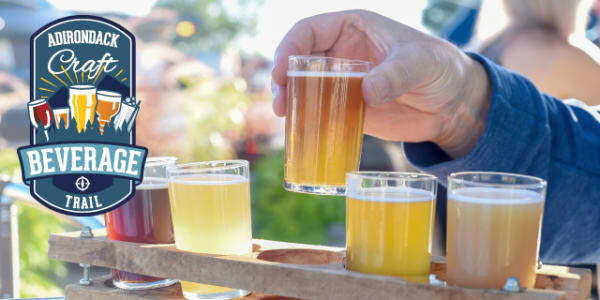 The Lake George Regional Chamber of Commerce has launched the Adirondack Craft Beverage Trail digital passport. So far, 200 people in six states have already signed up.

David SommersteinHow to use the Adirondack Craft Beverage digital passport

Chamber marketing director Amanda Metzger told David Sommerstein you add the passport to your smartphone, check-in at some of the locations in Warren, Washington, Essex, and Saratoga counties, and win prizes. Their conversation has been lightly edited for clarity.

So we offer prizes to say thank you for supporting the local craft beverage scene, especially after the year that we just had. Having something to say thank you to people who stayed loyal to local brands and helped them out throughout this and support them. And we were hoping it would create a buzz.

DAVID SOMMERSTEIN: How is this local craft beverage industry doing since COVID?

METZGER: Well, they seem to be thriving now. It was interesting to see how things evolved.

The distilleries all started making hand sanitizer pretty early on. So they stepped up with that. All of them – even though they had reduced tasting hours, or some of them were only doing to-go, and some of them were closed for a little bit – they all got through it and are all open now.

SOMMERSTEIN: Give me a hot tip. What’s a brewery or cidery or winery that I may not know about?

METZGER: Well, we have a range on here from the Adirondack Pub and Brewery [in Lake George], which has been early to the craft beer scene. But then the newest one is Ledge Hill Brewing Company, which is in Westport, New York. So that’s the newest addition to our trail. That’s the one that you may not have visited. It’s a small family own New York farm brewery.

SOMMERSTEIN: What kind of prizes do you get for visiting them?

METZGER: So if you sign up for the passport, you get access to special offers at some of the participants.

For the prizes, if you check in at five locations, you’re eligible for an Adirondack craft beverage trail window cling. After 10 check-ins, we have a tote bag that is specially designed to carry bottles, growlers and crowlers. And then if you make it to all 16 locations, we’ll have a grand prize that we’re announcing shortly. So you get an entry into a raffle for this grand prize. And it’s going to be a big basket full of merch and gift cards, all sorts of good stuff.

SOMMERSTEIN: How many of these have you been to?

METZGER: Oh, almost all of them! Yes, now I have to go again and check-in!

When to eat what: An hour-by-hour guide to a better diet

National award recognises hospital’s “imaginative” use of art and design