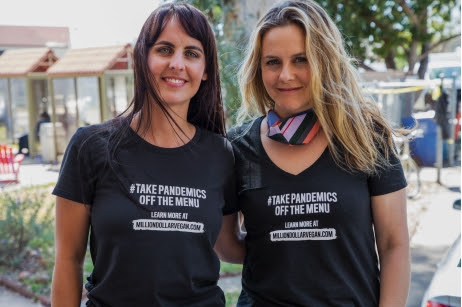 The vegan food-share event, hosted by global charity Million Dollar Vegan for the Boys & Girls Club of Boyle Heights in East LA, is one of several similar events taking place around the world as part of a $1M campaign to promote plant-based nutrition and support underserved communities.

At the event, Alicia – who has been a vegan for two decades – also gave a short talk on the health benefits of adopting a plant-based lifestyle, and handed out free copies of her bestselling cookbook: The Kind Life.

Boyle Heights is one of the most densely populated yet disadvantaged areas in LA, but it wasn’t always that way. When Grammy-winning Black Eyed Peas rapper will.i.am was young, his neighborhood of Boyle Heights was thriving. Now, the vegan musician is working to expand access to education for the children there through his i.am.angel Foundation.

“Providing nutritious vegan meals to the Boyle Heights community is about equity; it’s about justice and giving these families access to wholesome food and nutritional guidance that will nurture their health and empower them to make better choices for themselves and their loved ones.”

Million Dollar Vegan is on a mission to donate one million meals worldwide as part of a campaign to promote plant-based nutrition, fight food injustice, spread compassion, and reduce the risk of future pandemics – most of which have historically come from animals and animal products. British icon Joanna Lumley OBE and rock-star activist Bryan Adams recently supported the charity’s food relief efforts in India, and to date, they’ve handed out more than 400,000 meals worldwide.

“A plant-based diet can protect us from chronic conditions like heart disease and diabetes – conditions that are prevalent in under-resourced communities like this one. Shifting towards a plant-based food system would also reduce our risk of future pandemics, by alleviating climate change, deforestation, and the need for factory farms. That’s why providing food aid focused on plant foods is more crucial now than ever.”

Before the pandemic, an estimated 1 in 5 people in Los Angeles County lived with food insecurity, but after the COVID-19 outbreak, the number of people needing food assistance has increased markedly. It is estimated that 1 in 4 of our neighbors now face food insecurity.

“Feeding our families and making sure our youth never go hungry is and will continue to be a top priority of ours! We are so blessed to have Million Dollar Vegan and Alicia Silverstone partner with us in providing healthy meals and education, and could not do it without their support and the support of many others!”

To learn more about the relationship between chronic illness, pandemic risk and the foods we eat, as well as the many benefits of a plant-based lifestyle, check out MillionDollarVegan.com.

To learn more about the Boys & Girls Club, which teaches social skills and how to achieve personal, academic, athletic, artistic, and other desired goals to kids aged 5 to 17 years old, check out VBGC.org

Report: Growth Accelerates In The Specialty Food And Beverage Industry Despite The Pandemic

There Was Always Room for Jell-o : The Bay View Compass

Routine story with some interesting twists

Prevent and Treat Osteoporosis Through Diet and Exercise