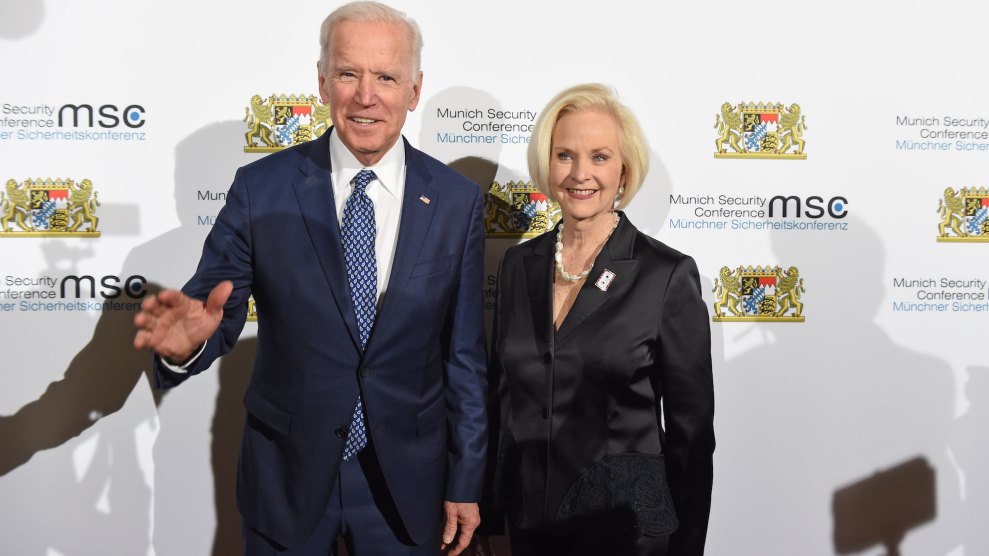 Let our journalists help you make sense of the noise: Subscribe to the Mother Jones Daily newsletter and get a recap of news that matters.

As the COVID-19 pandemic continues to roil Africa, India, and Latin America, droughts are crippling major global food-production regions (see California, Iowa, Brazil, Australia) and food prices are on the rise. Not surprisingly, so is hunger. According to the United Nations’ latest numbers from last year, nearly 690 million people are hungry, or 8.9 percent of the world population—“up by 10 million people in one year and by nearly 60 million in five years.” The main culprits for the surge: climate change disasters and the pandemic. By 2030, if present trends continue, the global poverty rate will likely rise to nearly 10 percent, the UN added.

McCain has no obvious qualifications for the job—beyond appealing to the presidential tradition of using ambassadorships to reward political cronies.

Amid this metastasizing crisis, President Joe Biden has made his choice for role of ambassador to the UN’s Rome-based Food and Agriculture Organization, the group tasked with coordinating efforts to meet a zero-hunger goal: Cindy McCain, the Arizona-based beer magnate, philanthropist, and widow of long-time Republican senator, presidential hopeful, and self-proclaimed “maverick” John McCain.

Cindy McCain has no obvious qualifications for the job—beyond appealing to the presidential tradition of using ambassadorships to reward political cronies. Biden and John McCain were famously chummy in their decades together in the Senate, and Cindy McCain cast aside her lifetime devotion to the Republican Party by endorsing Biden in the 2020 election.

The White House press release announcing the pick noted no experience in food or agriculture policy. McCain is the chair and director of the Hensley Beverage Company in Phoenix, the region’s dominant distributor of beer brands owned by the global beer behemoth AB InBev, a lucrative enterprise she inherited from her father. Her philanthropy, the McCain Institute, focuses on things like “developing character-driven leaders,” “international rule of law and security,” and “combating human trafficking.” Neither hunger nor agriculture figure among the foundation’s seven programs.

“We had big hopes that the Biden administration would name somebody for this ambassadorship with a deep knowledge of the issues and a deep commitment to working with and defending the rights and interests of the communities who are on the front lines of the fight against hunger and poverty, and for climate justice,” Tristan Quinn-Thibodeau, national campaigner for the anti-poverty group ActionAid USA, told Mother Jones. “The FAO ambassadorship is incredibly policy-oriented,” Quinn-Thibodeau said. The group helps develop guidelines for governments to follow, he explained, “to ensure that their food and agriculture systems are based in equity and fairness and justice—and are able to be sustainable into the future—and not lead us into some kind of apocalyptic situation where the fields are burning because it’s getting too hot and there’s drought.”

Quinn-Thibodeau called the appointment of McCain “extremely disappointing” and a “sign that Biden isn’t taking the issue seriously.” (He noted that Donald Trump also tapped a political ally to the post: Kip Tom, an Indiana agribusiness executive with close ties to the pesticide industry but no discernible experience in hunger advocacy.)

Meanwhile, the fight to reduce hunger amid climate chaos is losing ground. Back in 2015, the United Nations announced the goal of ending hunger “everywhere” by 2030. While undeniably ambitious, the idea had momentum behind it. Between 2005 and 2014, the global hunger rate fell from 12.6 percent to 8.6 percent, with the number of hungry people dropping from 825.6 million to 628.9 million. Since then, progress has stalled. “The world is not on track to achieve Zero Hunger by 2030,” a 2020 UN report conceded. Hunger is ticking up, even as climate change threatens to keep hammering farm regions across the globe. The report added: “This is an alarming scenario, even without taking into account the potential impacts of the COVID-19 pandemic.”

Are The Additives And Ingredients In Non-Dairy Milks Unhealthy?