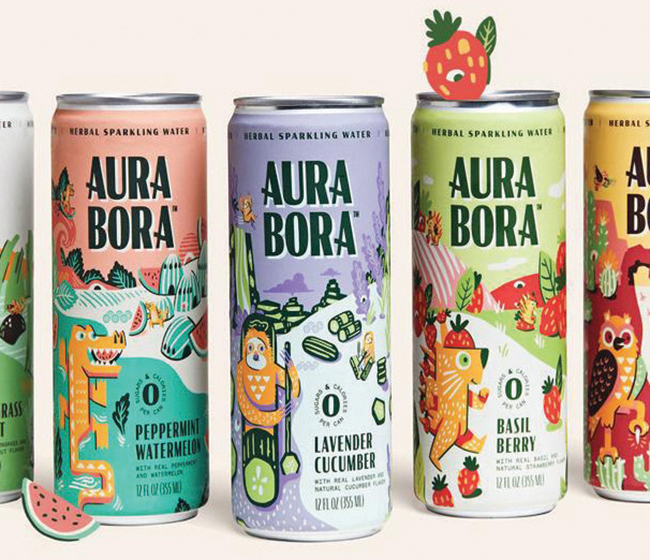 According to a recent report from IRI, total dollar sales in the category accelerated 9.8% year-over-year, reaching over $4 billion in sales across most retail channels, including c-stores, over the 52-week period ending October 31. Additionally, total dollar sales in the category jumped 7.2% during the two-week period ending October 23, according to a report of NielsenIQ data by Goldman Sachs Equity Research.

However, as the sparkling water category continues to welcome new brands and line extensions to the market, securing on-shelf space is becoming increasingly competitive. Despite points of differentiation like flavor and function, newer sparkling water brands are looking to embrace opportunity in channels where the category has not traditionally operated, including e-commerce, c-stores and on-premise partnerships. 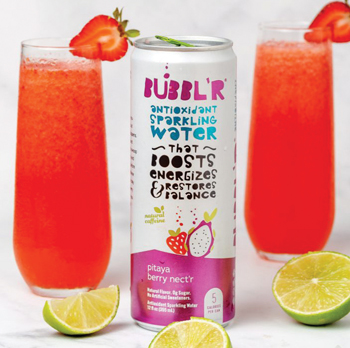 With premium positioned and functional products driving innovation, Joan Driggs, VP of Content and Thought Leadership for market research firm IRI, emphasized the growth opportunities for sparkling beverages in c-stores. Driggs noted that continued supply chain challenges could be the push brands need to explore different formats, for example switching from cans to plastic bottles that are resealable and more appropriate for placement in convenience.

“I think there’s really an opportunity in the convenience channel because as we gain mobility and people are increasing their time at work and their commute time, they are going to be looking for more convenient beverages and sparkling waters are such a great, clean, no-pressure beverage,” Driggs emphasized.

Talking Rain’s Sparkling Ice set its sights on convenience several years ago, and it still maintains its lead in c-stores, holding the highest percentage of unit sales; it’s closely followed by brands such as Topo Chico and antioxidant-infused seltzer water Bubbl’r, according to data from Skupos, a tech company that collects sales data from over 14,000 independent c-stores in the U.S. In independent convenience, sales of Nestle’s Perrier jumped 12% this year, accelerating the carbonated mineral water into the fourth top seller spot ahead of brands such as Vita Ice, San Pelligrino and PepsiCo’s Bubly.

Overall sparkling water unit sales have decreased slightly, at a rate of 4%, in c-stores this year according to data from Skupos. According to Driggs a decrease in unit sales has been experienced across multiple channels and non-alcoholic beverage categories as brands grapple with supply chain constraints and are forced to take on price increases.

Within Skupos’ network, distribution of sparkling waters has declined during the month of October with only 62% of its 14,000 stores carrying a sparkling water product at all — a 9% drop from the rate of 72% distribution that has been consistent over the past year. Skupos’ data analytics team noted that the decline in availability may be due to supply chain hold ups, forcing brands to prioritize their highest velocity products into channels with higher demand such as grocery and club. 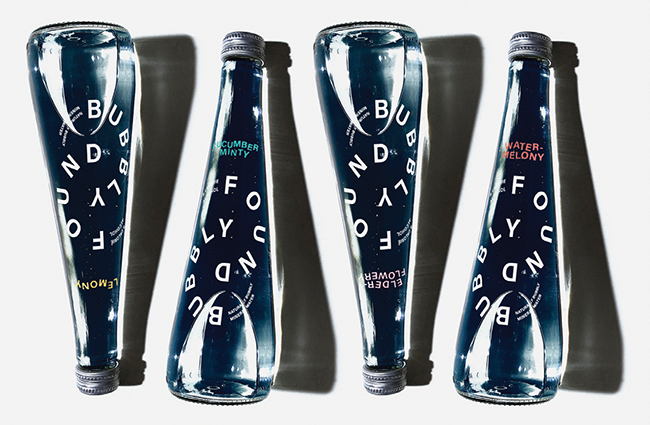 One of the most notable and lasting impacts of the pandemic is the shift in consumer buying habits alongside the rise and increased reach of e-commerce platforms. Sparkling water brands, like other beverage companies, have leaned into the shift.

Some brands have found their niche entirely online such as premium, naturally carbonated mineral water brand Found Bubbly, which relaunched as a strictly direct-to-consumer business over the summer after a period of suspended operation at the onset of the pandemic. Prior to the pandemic, the majority of Found Bubbly’s sales were on-premise but the brand now boasts 1,200 active subscription-based customers and drives trial through free sample packs online, according to an earlier interview with Found Bubbly CEO Onur Kece.

E-commerce beverage sales increased almost 20% at the onset of the pandemic before it eventually plateaued, according to a joint report on U.S. Online Grocery sales from market research firms IRI and Forrester. Although the channel hasn’t experienced continued upward growth, Driggs believes that the prominence of e-commerce will not dwindle.

“Particularly consumers who were using e-commerce before the pandemic, they have just expanded their reliance to include a lot of grocery items and fresh foods — so they are really the big win,” Driggs said. “Retailers and brands have invested so heavily in e-commerce and they are continuing to do so.”

Retail platforms and online marketplaces offering click-and-collect and rapid delivery-type services present a fairly untapped opportunity in the e-commerce realm for sparkling water brands, Driggs believes, noting the weight of the product makes it difficult to ship in the sense of a typical online platform.

Retailer marketplace platforms also present an opportunity for new and emerging brands to gain traction before seeking in-store shelf space. As out-of-stocks continue to disrupt pre-planned on-shelf displays, retailers may give those “challenger brands a fighting chance” to capitalize on their points of differentiation and move from online platforms to in-store placement, Driggs noted.

“If you can’t deliver or are inconsistent about your delivery then retailers are going to feel they have the right to go to where they are going to get [what they need],” Driggs said. “As they think about their own assortment… many of them are going to say we only need two unflavored sparkling waters, we don’t need six… they will start to differentiate with more interesting blends, more flavors or more products that have a bit of a health-halo attached to them.” 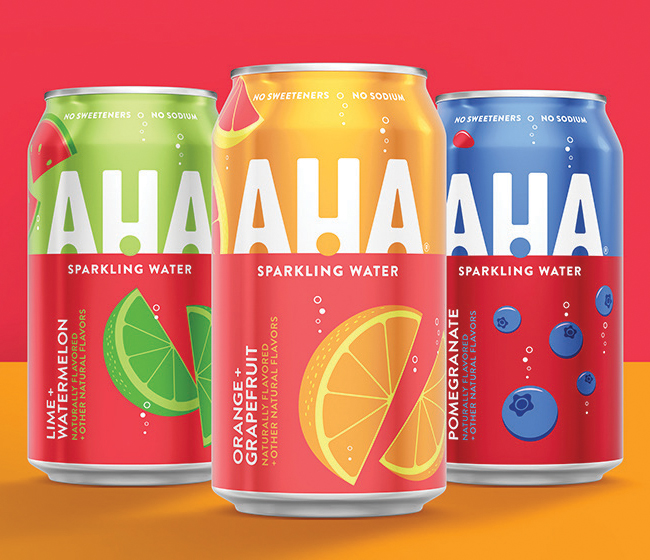 The Stronghold In High-turn Retail

For the major players such as Coca Cola and PepsiCo, the pressure is on to innovate with new brands into the premium, functional space as they try to hang onto their broad shelf sets in high-turn retail channels across the country.

They have fought back gamely with brands like Coke’s AHA and PepsiCo’s Bubly, both of which have grown quickly through their owners’ in-house distribution networks. According to recent data from IRI, AHA’s total dollar sales grew 123% year-over-year for the period ending September 10. With a variety of caffeinated options and eight flavors ranging from Blueberry + Pomegranate to Raspberry + Acai, AHA has differentiated itself with flavor and function from Coke’s premium sparkling line, Topo Chico, which saw a 36% increase in sales reaching $277 million this year, according to IRI.

Similarly, PepsiCo’s Bubly brand still holds the lead in the category, seeing 10% growth and reaching $377 million in sales this year.

But those brands are attempts to match (or in the case of Topo Chico, purchase) the independent brands that lead the category. Brands like Sparkling Ice, La Croix, Polar, Spindrift, and Waterloo are all free agents, as are exciting newcomers like botanical-infused sparkling water brand Aura Bora. Launched in January 2020, the sparkling fruit water has excelled in natural retail, claiming three of the top 10 best selling single SKUs in the category and channel in September, per SPINS data.

This year, La Croix saw a 13% increase in sales reaching $552 million while Waterloo expanded its reach to over 3,000 doors and Spindrift saw a 67% increase in total dollar sales, according to IRI.

And in a world where sampling has virtually disappeared in conventional channels, Waterloo has looked outward to continue fueling growth, utilizing consumer feedback to introduce its new seasonal flavors, Pineapple, and most recently, Cranberry, and driving trial through a high volume of on-premise partnerships, including music festivals across the country. 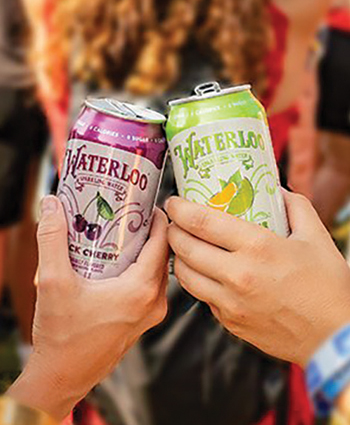 While Waterloo is looking to events as a marketing channel, other brands are looking to on-premise partnerships, both as a sales channel and as a way to get product noticed within that ongoing sampling void.

With lockdowns lifting and beverage volumes shifting back to on-premise, according to Nielsen scanner data, Driggs believes partnerships with bars and restaurants present the most valuable opportunity for new brands looking to drive trial.

Industry analysts from Whole Foods and IRI, among others, predict that consumers’ interest in beverages positioned as alcohol-alternatives will continue to increase throughout 2022, especially with drinks that offer relaxation benefits without any buzz. In terms of functional sparkling products, on-premise could present an opportunity for hemp-infused brands like Rhythm, Cloud Water and Recess to gain exposure as they await FDA guidance to allow broader distribution across conventional channels.

And while that presence in bars might make for a sober-curious alternative, sparkling water brands are actually trying to win both on and off the wagon. Following along with the pandemic-influenced rise of at-home cocktail making, some sparkling water brands have also seized the opportunity to position themselves as mixers and alternatives. While celebrities like Blake Lively have gotten in on the action with the launch of Betty Buzz, a sparkling water line she has positioned as an alcohol-alternative or mixer, even national brands such as AHA and Bubly and fairly new lines including Nixie and Waterloo have promoted their product for alcohol-adjacent use occasions.

“Sparkling water is the new CSD,” Driggs concluded. “I have been amazed over the years at the level of competition and it just keeps coming and people just keep drinking it up.”