Fertiliser drama: Is there poison in our food? | Print Edition

by FBR
in food additives
0 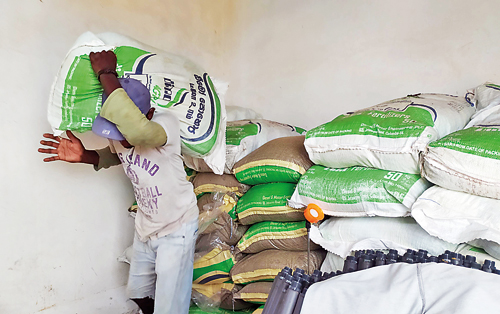 A farmer carries a bag of fertiliser.

As Sri Lankans in general, we believe that much of what we eat is poisonous. This is due to the belief that chemical poisons are added in large quantities during food production and processing. In addition, we hear from many medical professionals in the media that not only the older generation but also the young and children are suffering from non-communicable diseases such as cancer, diabetes and kidney disease and that the root cause of such a condition is excessive poisoning caused by food contamination. They categorically claim that “our vegetables, fruits and other agricultural crops are full of poison”. The use of pesticides and chemical fertilisers has become exceedingly popular in the agricultural sector due to their high potential for destroying pests and high productivity in a wide range of environmental conditions. Due to the increase in usage and the increasing awareness about it in the media, there has been considerable concern among consumers about them. The socialisation of the notion that the use of these agrochemicals is the root cause of kidney disease, which has become more prevalent in the Rajarata area in recent times, has led many to believe and act on the fact that our food, especially vegetables and fruits are full of toxins. As a result, our per capita consumption of fruits and vegetables to grow significantly, has been hampered. Although such an ideology has caused concerns about our rice in the past as well as hindered the export of rice that time, it must be said that over time that situation has somewhat disappeared. However, it must be emphasised that all of these theories are individual opinions and that very short and limited research results were used to justify those views. It also does not appear that such limited research results have been reaffirmed.

There has never been a scientific confirmation of the existence of cadmium and arsenic in rice and other agricultural crops. Those ideologies have been somewhat withdrawn. But since the media or the people are not properly aware of this, it seems that people are being intimidated by using this fact from time to time. Also, research and studies conducted by several organisations, including the World Health Organisation, have not been able to reach any conclusions about the cause of kidney disease and the main reason for this is that some people who are interested in these studies have come to a preconceived notion of agrochemicals even before the research. However, many scientists are reluctant to talk openly about this, as those who oppose the agrochemical ideology are labelled as hirelings of agrochemical companies. However, so far it has not been confirmed that the vegetables and fruits available in the Sri Lankan market are generally and systematically at a harmful level. Cases of individual incidents can be reported anywhere in the world.

But it must be said that the statements or reports that the agricultural products in our market are full of chemical poisons and therefore our people are suffering from an exceedingly high level of kidney, cancer and non-communicable diseases are just empty statements without any basis. It should be noted that the presence of traces of agrochemicals in food products is not a reason for alarm since the human body has a mechanism to eliminate them without causing damage to the body. With the advancement of science, the technology of testing and identifying certain chemical levels has improved, and today’s technology has advanced to detect the presence of even lower levels that could not be identified before. However, just because an ingredient is present in a food does not mean it is dangerous. The work is important in its dimensions. If those levels are below the level of natural endurance in our body, it is not a cause for concern. Our body, more particularly the liver is detoxifying all these unwanted elements to the level of tolerance. As long as we consume food to the tolerance limit, there is no worry. However, it is the responsibility of governing bodies to keep a tab on the food in the market. It is not a scientific approach to ban agrochemicals totally. All those unscientific approaches are spread through the media and rumours by people with some vested interests. Those who expect these compounds to be zero should be told that absolute zero is non-existent in science. Many of these noncommunicable diseases are caused by an imbalance in our diet.

It is ridiculous to get food in the wrong amounts with excessive higher calories and put the blame onto the so-called poisons in the food for the diseases we suffer. It has been scientifically proven that consuming large amounts of high calorie foods are suitable only for highly active people, others may likely to develop diseases such as diabetes and cancer. Diabetes is the number one disease affecting the kidneys followed by dehydration (or consuming low quality water). This is especially the case in the Rajarata area where the well (including tube well) water is extremely turbid and naturally rich in fluoride. The fluoride contamination is visible and a high number of people from the area suffer from yellowish dental discoloration due to “fluorosis”. Fluoride has been recognised as extremely toxic to the kidneys. The notion that our “food is poisonous due to chemical contamination” is based on some unscientific studies that forget these key points.

Additives of food: Are they poisons?

Food preservation is a must. Food processing and its technology are important in this regard. Food poisoning can be prevented by preserving food properly. Although food poisoning and related deaths were common in Sri Lanka many years ago, it has declined rapidly with the advancement of technology using preservatives. However, these days, it is also common to brand as dangerous carcinogen of the ingredients that are used to preserve food and to maintain the quality of the food. There is a campaign by some in the health community to intimidate people into believing that the ingredients in the food, which are symbolised by the E numbers, are dangerous carcinogens or legitimate carcinogens. This alone is baseless ignorance. Encoded in E numbers means the European standard should not be considered as dangerous chemicals. According to the European standard, ingredients that can be applied to food as well as ingredients that cannot be used are classified. Even the vitamins used to enhance the quality of food are encoded in E numbers (e.g., Vitamin C-E 300, Vitamin E – E306).

Our society is plagued with non-communicable diseases due to overindulgence in higher calories foods that are pleasurable to the tongue and, in comparison, due to a lack of physical activity. However, most of these people are reluctant to take responsibility for their own bad behaviour as such. The responsibility for this should be borne by some doctors who are trying to mislead the public, as well as the media and government agencies that do not allow proper awareness. They forget the real enemy. Therefore, properly trained nutritionists should be given the opportunity to provide accurate information on nutrition to the public. We can overcome these existing issues by eliminating the misconceptions we have about food, false fears and shaping our diet and lifestyle with a proper understanding of the food available to us. Proper nutrition should not be simplified as something that can be achieved by choosing good and superfoods and eliminating poisons and toxins. It is more important to take a scientific approach when making decisions with the right attitude towards food.

(The writer is a senior lecturer attached to the Wayamba University of Sri Lanka. He can be reached at ananda.ch@wyb.ac.lk).

Plant-based restaurants in San Antonio worth a try for vegetarians, vegans and meat-eaters