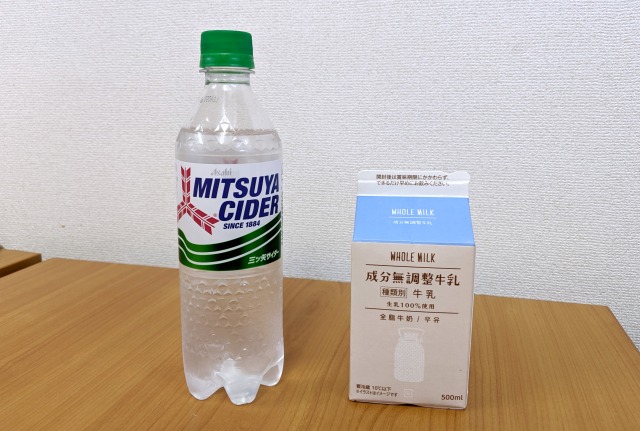 Don’t blame us. It wasn’t our idea.

Following the accounts of Japanese food producers can have its benefits. They often post interesting ideas of how to enjoy their products in new and creative ways, like mochi ice cream on cheese toast or roasting persimmons.

They also sometimes come up with something so unexpected that it makes you wonder if they’re playing with a full deck. Such a time occurred a few months ago when the National Federation of Agricultural Cooperative Associations or “Zen-Noh” offered this tip to liven up your next bottle of soda.

▼ “If you mix cider and milk, you get a gentle spring cream soda.”

In Japan, the term “cider” is often used for soda pops, especially of the lemon-lime variety like Sprite or 7-Up. The most famous brand, Mitsuya Cider, which is pictured in the tweet, even incorporates the word in its name.

Especially since the tweet was written in the traditional style of vertically from right to left, which must have been time-consuming on Twitter, you might be thinking: “Go home, trade organization. You’re drunk.”

Even our worldly reporter Mr. Sato was shocked by such a notion. But after thinking about it for a moment, he thought maybe it wasn’t such a crazy idea after all. Milk is like cream, and soda is a lot like soda, so perhaps Zen-Noh is on to something.

To find out, Mr. Sato enlisted the aid of his colleague Seiji Nakazawa. Seiji was selected for this mission, because when he first joined our organization, he had a strange habit of ordering cream sodas every time they went to a café.

He was certainly experienced with cream sodas and probably the best to judge if this strange brew really did compare. Now that the team was assembled, Mr. Sato poured some milk into a glass.

He then topped it off with some Mitsuya Cider. The bubbles seemed to rush upward extra quickly upon contact with the milk.

It surprisingly looked the part. A creamy foam of fine bubbles sat on the top of the glass.

Mr. Sato tried some first to get a baseline reading. It was very smooth and creamy, because the fizzy carbonation was suppressed by the milk.

But to determine if it really matched the cream soda experience, he passed the baton to his partner and prepared another one in a Coca-Cola tumbler for the full effect. Seiji took a sip with the face of a man who takes his cream soda very seriously.

▼ Seiji: “Hmmm…. It’s not really cream soda. I don’t feel it tastes like a mixture of milk and cider either. It uses Mitsuya Cider, so it’s very sweet, but if you said it tasted like cream soda, I would disagree. It is delicious though.”

Mr. Sato was in awe of Seiji’s thorough analysis and realized he was in the presence of a true cream soda master. He stared at his younger co-worker like a teenager with a crush on their Geography teacher, and was about to tell Seiji how he felt when the cream soda master finished his drink and suddenly cut him off.

▼ Seiji: “By the way, Mr. Sato, I think you misunderstood why I always ordered cream soda back when we used to go to the café.”

Seiji explained that he never drank cream soda before or since that time, and that the only reason he always ordered it was because Mr. Sato paid every time. When he was just starting out, Seiji could barely keep up with his rent and struggled to keep the water from getting shut off in his apartment.

So, whenever Mr. Sato invited him to the café he knew it was his one chance to enjoy something frivolous and fun and ordered the cream soda every time.

All this time, Mr. Sato had no idea and was greatly disappointed by the revelation. Not so much because Seiji was exploiting his kindness. Actually, he was more than happy to bring a little joy into his life back then, but this completely discredits Seiji as a cream soda master and thus renders this whole experiment null and void.

We still think this doesn’t really taste like cream soda, but it’s not bad for what it is. It’s also a good way to use up extra milk when the next surplus rolls around, which should be any time now.

Doja Cat Taps LIFEWTR to Help Fans “Get into Her Drip” and Unlock Access to VIP Concert Tickets, Planet Her-Inspired Activations and Merch Through Latest Collaboration

Palisade: The Wine Country Down the Road