“You can use it on anything, but because it has a king cake flavor, you can pour it on top of coffee cake and it makes it taste like king cake,” said Simoncioni, who is a former co-owner of Sweet Charlotte’s of New Orleans Chocolates and former CEO of Aunt Sally’s Pralines. “I put it in coffee. I make rum drinks with it. My wife, Charlotte, makes bread pudding with it and boy is it good. We’re the only ones in New Orleans that have anything like it. It’s a completely original recipe.” 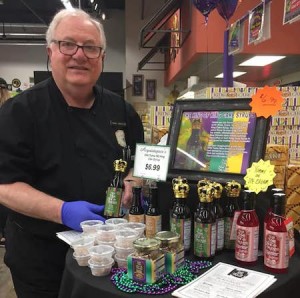 Simoncioni, who also worked for Ross Nutrition for three decades and authored two cook books, said his “bucket list” included creating a line of syrups inspired by his memories of growing up in New Orleans. Four years ago, he made the dream a reality. In addition to the king cake-flavored syrup, he also makes a mint julep variation and one inspired by the nectar soda from the old K&B drug stores. Rounding out his lineup of products, Simoncioni also makes several vanillas.

“Our New Orleans French Vanilla is certified Creole and made with all natural ingredients,” he said. “It’s double fold which means it is really strong and aromatic. The nectar syrup, meanwhile, is great for refreshing ice cream sodas, dessert toppings and made without corn syrup. We use pure Louisiana cane sugar and the best ingredients.”

Simoncioni partnered with a Covington-based contract manufacturer to create and bottle the products. He makes everything in small batches and distributes it all himself to more than a dozen independent local retailers. He also sells online — but he’s made a choice to keep things small.

“I’m not interested in blowing and going and becoming a big thing,” he said. “I’m 72 years old. I’ve already been successful in my life. I’m just enjoying this. One of my best hobbies is cooking and I enjoy creating new things. … I [want to] stay sharp, enjoy life, and try to make others happy also!”