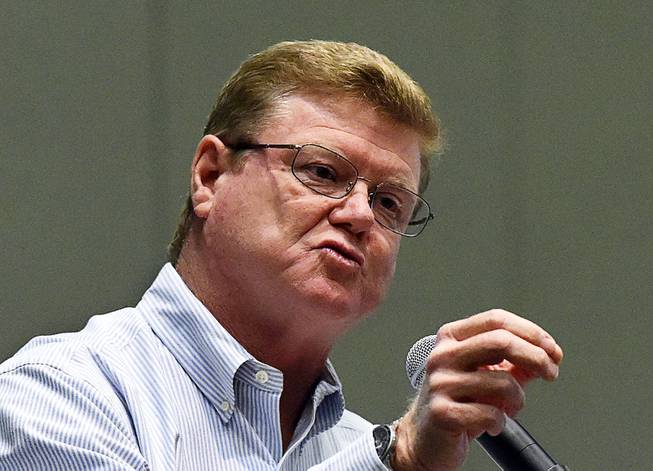 In this Aptil 17, 2017 file photo, Nevada Republican Congressman Mark Amodei answers a question during a town hall at the Reno Sparks Convention Center in Reno.

ELKO — Economic recovery, the Ruby Mountains and the impact of the Biden administration on mining were topics discussed by U.S. Rep. Mark Amodei during his latest visit to Elko.

The congressman was in town Friday to speak to the Nevada League of Cities at the 2021 League Congress. He visited the Elko Daily Free Press to give his thoughts on a variety of issues faced by rural Nevada and Elko County in particular.

Although Amodei grew up in Carson City, he talks about his connection to the area that goes back about 100 years.

“We’ve got some roots here and it’s nice to come (back),” he said. “(My) dad was born here in 1930 and (my) grandparents were married in Jiggs, back when there were a few more buildings than there are now.”

How does economic recovery look for rural Nevada as we emerge from the pandemic?

The pandemic affected different parts of the state. There’s been three bills so far in Congress, but it’s not all apples and apples. Some of them were for testing, some were for vaccinations and paycheck protection. But after the third bill, with $6 trillion being pushed into the economy within six to nine months, you’ve got a challenge everywhere in terms of the money that was intended for those folks who needed a safety net.

We’ve been trying to facilitate letting local leaders (at the League of Cities, such as) Elko County Commission and the Elko City Council and other folks say what it looks like in terms of city budgets, what they actually lost from the pandemic versus what they received in assistance funds. We’re finding out that whether it was the state, Clark County, Elko County or the City of Fallon, the economic projections for what the impact would be.

The Ruby Mountains Protection Act had its first hearing on the Senate floor this month. Are you in support of it?

We’re a co-sponsor of the bill and introduced companion legislation, so I expect that to go well in the Senate. I don’t think anybody is really opposed to it.

When you look at it, it was brought about by some of the mineral lease applications that went through the Forest Service. A lot of people were saying “Tell them they can’t do it.” But they need to process the applications. It’s something I think works quite well. We held off to say, “Why don’t you see what the process produces first instead of telling them what to produce?” And lo and behold, they said application denied.

A couple of things happened. One is that it allowed the process to work to a result, which I think everybody agreed with. The second is as a result of that, Sen. Cortez Masto, the primary sponsor of the bill, said, “We need to make sure this doesn’t happen again.” It was an opportunity for the public legislative process to work and I think it has.

You don’t have people saying “You’ve taken away a property right.” We vetted it thoroughly, the boundaries and what is in there, so it was an easy thing to support and I expect that legislation to be signed into law during 2021.

The Biden administration says it supports “responsible” lithium mining. What does that say about other types of mining?

I think it’s going to be a challenging time for permitting. … You’ve got some great Bureau of Land Management and Forest Service people in Elko in terms of the Elko District office and the Humboldt-Toiyabe National Forest. You have a great state director at the Bureau of Land Management who is a solutions guy. But there have been some indications that … there’s a lithium issue down in Esmeralda County. Some folks are going through the permitting process and they’re having a pretty tough go of it. The folks closer to home at Nevada Lithium are pretty close to the end, although not completely.

I think some people may say the last administration was too easy, and I think there will be people saying this administration is basically too hard. The question becomes: Do you think it is possible to responsibly use resources in a true multi-use way? In other words, do no harm to the environment. Do no harm to existing right-holders, whether they’re ground water rights-holders or anything like that. And if it is, and somebody’s entitled to it, then they should get a permit to do whatever the proposal is in a responsible manner with clean air, clear water and clean soil. But we’ll see. I think a change in administrations you get a change in emphasis from the Department of the Interior in terms of what “multiple-use” means.

Is Congress considering any measures to deal with the drought’s impact on water and power supplies?

That’s the energy and commerce committee. When you say water and power supplies, power will be an issue in terms of is it renewable, is it solar, is it wind, is it hydroelectric because you’ve got some rural electric co-op folks; Wells is one of the ones that’s a pretty active one, and then you have the incumbent producer around here, NV Energy. You’ve got the coal-fired plant at Valmy and some other stuff to where it’s like, “What is your energy policy going to be and how does that fit into everybody else’s lives?”

You’ve always got to talk about air quality and talk about water quality. What is the price of whatever it is they’re producing and selling, whether it is commercially or to the mines or whatever? With energy it’s got a lot of by-product issues that spring from what the cost of the kilowatt hour of energy is, whether it’s to a home or to a mine processing facility. That is something we try to keep an eye on, not to say ignore the environment, and we just want the cheapest thing available, but to say, find the sweet spot where we’re not doing harm to the environment but it happens not to be totally renewable, then OK maybe.

So water is always a challenge in this neck of the woods, and always will be. Conservation is the name of the game. New sources of water in Nevada, whether it’s drilled for it or it’s coming through surface water in a river or stream somewhere, both of those assets are pretty much defined. So what you’ve got subject to whatever your precipitation is in the mountains each year, is what you’ve got, and the challenge is how do you basically use that in a way that doesn’t deplete the resource and allow you have the economic development …

So that will continue to be a work in progress. I would note, though, however, primary jurisdiction over ground water in the state of Nevada is a state thing through the state Conservation and Natural Resources Department and the office of the State Engineer. And I bring that up only to say that’s a good thing, because the closer to the people of Nevada that those decisions are made, I think that’s a positive thing that we need to guard jealously, not that I’m here to bash the Congress or anything, but decisions made 2,500 miles away by people are — with the exception of six — are not from Nevada, quite frankly I think aren’t as good as decisions made by people from Nevada about Nevada stuff.

Anything else for your constituents?

And so we try to keep a pretty close eye on what’s going on, just because, hey, if the mining industry has a problem, that’s a problem for rural Nevada. If we have a problem in terms of tourism — because there’s a lot of tourism in rural Nevada, too — we keep an eye on that. How we dealt with rural Nevada (Northeastern Nevada Regional Hospital) or Humboldt General, all of those sorts of things in terms of health care is a big part of the fabric of any community.

I know that NV Gold mines is getting involved. One of the big things that’s been a challenge up here is internet access and the quality of service and stuff like that. So I think that is turning a new corner, and maybe get some new vendors going in here. You would think if you’re on Interstate 80 it’s fine, those lines are just automatically there. Not true. So there’s still work to be done in that issue for Elko, but you know, it’s one of those things where you can never say “mission accomplished.”

Nomogram to better assess the 2-year risk of NAFLD

Nomogram to better assess the 2-year risk of NAFLD

Who is anti-poverty campaigner Jack Monroe and what are they know for?