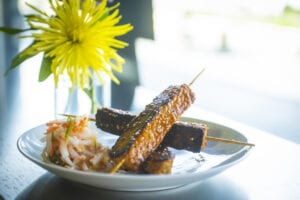 DIGGIN’ VEGAN: Tempeh skewers at Living on the Veg are tempting. Variety has sprung up in other spots, too. (Photo by Ryan Morrill)

Along with Living on the Veg’s two fully vegan locations, a lot of eateries in the area have been offering plant-based options, from favorite sandwich shops to high-end restaurants, part of a larger trend of many Americans eating less meat, whether for the health of the planet or for their own health.

“There’s definitely a need for more restaurants to offer meatless as it’s more and more common these days. My wife is a vegetarian, so we are always looking for more options,” said Paul Sabarese, co-owner of The Arlington in Ship Bottom and The Daymark in Barnegat Light. “We’re very excited to have the new Living on the Veg location in Manahawkin.”

Both of his restaurants offer vegetarian dishes in the form of unique international plates, a grilled carrots with pistachio, Harissa (a Tunisian hot chili paste) and yogurt as well as a grilled beet with lentil and Muhammara (spicy red pepper and walnut dip) at The Arlington and a Za’attar (Middle Eastern blend of spice and seeds) cauliflower, paprika aioli, lebneh tomatoes and harissa at the Daymark.

In Beach Haven, Barry’s Do Me A Flavor has long been known for fish tacos and cheese steaks that are talked about all over the state. In big news for vegans and vegetarians this year, owners Barry and Nicole Baxter are offering a vegan cheese steak that even meat eaters are into.

“Last winter, we were in Philadelphia on a fact-finding mission and discovered a protein shred that passed our test,” said Barry Baxter. “It’s a seitan (a vegan protein made of wheat that has been rinsed of dough), and we enhance it with vegan American cheese and any other option you may choose. We recommend ‘The Works,’ which is sautéed onions, mushrooms and green peppers.”

The reviews have been raves.

Down the road, Bird & Betty’s has added a Buffalo Cauliflower Sandwich to its fun-inspired menu.

Even Wawa and Dunkin’ Donuts are now offering Impossible Meat. Many of the boardwalk-style restaurants on the Island are doing very well with the Beyond Burger, which is very popular, made of pea protein and coconut oil.

Wally’s in Surf City has remained ahead of the curve, offering many vegan options to its popular comfort food. While many of those items are made from scratch, Wally’s also offers meat alternatives from Gardein and Beyond Burger.

Daddy O in Brant Beach has always offered veg options popular at the bar and in the dining areas. This year, it has a new fully vegetarian menu that includes Black Bean Falafel and a Sticky Tofu and Noodle Salad.

The Woo Hoo, which has been making its own ice cream for almost 10 years in Beach Haven and has had a soft-serve vegan ice cream for some time, has created a scoopable vegan ice cream made in-house by owner Megan Kilroy, which it also now supplies to The Showplace Ice Cream Parlour adjacent to Surflight Theatre, Neptune Market in Harvey Cedars and soon the Union Market in Tuckerton.

“We have always wanted to be a place where everyone can find something. We were very allergen focused from the start – nut free, gluten free and dairy free options,” Kilroy explained. “We have a vegan Fudgesicle now as well. Our chocolate and strawberry syrups are vegan and made from scratch.”

The Woo Hoo has been doing a vegan black bean burger for some time called “The Griffin,” named for a customer it was designed for. This year it has switched to a better vegan nugget, one which co-owner Shaun Kilroy said would be convincing to people as chicken in a blind taste test.

‘An archaeological dig for food’: recipes to cook with kids during Australia’s lockdowns | Food

‘An archaeological dig for food’: recipes to cook with kids during Australia’s lockdowns | Food

Are non-alcoholic drinks safe during pregnancy?