Even the most dispassionate wine correspondents fall in and out of love with different categories. I adored the wines made in California in the 1970s, for instance. Then I tired of the much less distinctive and super-ripe fruit bombs that typified California wine in the 1990s and early 2000s, especially when they seemed so expensive compared with similar wine. Now I’m enthused by a new generation of west-coast producers and their much greater range of styles.

Likewise, there was a phase in the 1980s when burgundy was often uncomfortably tart, thin and underripe or just plain dull. It has become much more reliable this century, as well as more expensive. Despite the prices, I am considerably more enthusiastic about burgundy — both red and white — than I used to be.

One category to which I have been reconverted recently is white rioja. When I first encountered it in the late 1970s, there were memorable examples, such as Castillo Ygay from Marqués de Murrieta. These were a deep apricot colour, heady with beeswax and lemon and clearly capable of ageing every bit as well as white burgundy. Then came the novelty of cool fermentation in the 1980s. The new method was designed to preserve fruit and freshness, but often at the expense of character. Too many white riojas became just crisp, light and featureless.

But tasting a selection of current offerings has rekindled my interest. Many examples are genuinely distinctive. They are often quite mature dry whites designed for drinking with food more than merely quenching thirst. There’s the beeswax and lemon again, sometimes a hint of lanolin together with a rich, creamy texture, but real refreshment too. Like Rioja’s reds, many of the successful wines are aged in oak barrels and some seem (unusually) proud of it. Good white rioja appears to have the guts to stand up to oak ageing.

Only about 10 per cent of the vines in Spain’s most famous wine region are light-skinned and Viura is by far the most planted. I have long been a fan of this grape, which is known as Macabeo in the rest of Spain and as Maccabéo or Maccabeu in southern France. It can make serious wines worth ageing, as shown by the likes of Domaine Gauby, Domaine de l’Horizon, Lafage, Olivier Pithon and Le Roc des Anges in Roussillon.

Almost half of Rioja’s Viura vines are more than 40 years old and therefore likely to produce small quantities of characterful grapes. They call Rioja’s other traditional white wine grape Malvasia. It was typically blended with Viura, and 40 per cent of these vines are more than 20 years old. 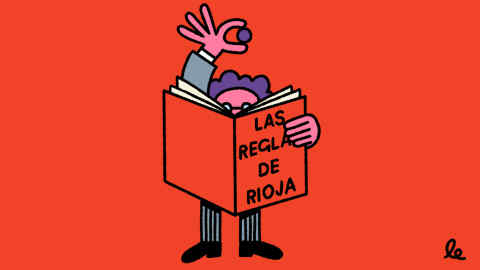 But in 2009, the local authority in Rioja, the Consejo Regulador, decided to encourage growers to plant the international varieties Chardonnay and Sauvignon Blanc, which risked robbing white rioja of its local character. Together these two varieties now constitute 6 per cent of all white wine grape plantings. At the same time, the authority encouraged growers to plant the more truly Spanish varieties Garnacha Blanco (Grenache Blanc), Tempranillo Blanco, Maturana, Turruntes and Verdejo. Of these new varieties, Tempranillo Blanco has been by far the most popular, already accounting for almost 13 per cent of all of Rioja’s white wine grapes, even though this pale‑skinned mutation of Rioja’s dominant red wine grape was first identified as recently as 1988.

I loved the fact that so many of the white riojas I tasted lately had real local character and did not seem “international” at all. The most traditional of the lot — perhaps too distinctive for some palates — are the two white bottlings produced by the López de Heredia sisters, who run the historic bodega in Haro. This bodega was founded in 1877 just beside the station, where barrels of wine would be loaded on to trains destined for France, whose own vineyards were then suffering from the crippling effects of mildew and the phylloxera plague that only reached Rioja in 1901.

López de Heredia’s whites are aged far longer than most wines today and then released at really very kind prices. At present, a Hong Kong merchant is offering their 2003 Viña Tondonia Blanco Reserva for just £40 a bottle, while a US merchant is offering the 2002 Gran Reserva for $85. In the UK, the 2010, 2011 and 2012 vintages of its stablemate, the single-vineyard Viña Gravonia, sell for about £24 a bottle. Try finding any other 10-year-old wine at this sort of price.

A good example of Rioja’s American oaked style is provided by Bodegas Riojanas’ Monte Real 2020, which was fermented in barrel and still carries very obvious, if unfashionable, traces of sweet vanilla oak that combine well with the fresh citrus character of Viura.

You might expect the head chef of The Quality Chop House in London, which is co-owned by my son Will Lander, to favour red wines. But Shaun Searley is a huge fan of white rioja. “For me, it is a wine that is so complex that not only can it be paired with food, it is perfect on a hot day just on its own,” he says. “I love the rich, almost caramelised, buttery flavour profile and the sharp candied lemon-skin finish.” He recommends it with “a big plate of hot shellfish . . . or simply an aged Comté”.

Indeed, restaurateurs are generally pretty keen on white rioja because they can offer their customers unusually mature white wines that go with a wide range of foods at bargain prices. Why not take advantage of these bargains yourself? I have listed some favourite examples in ascending order of richness and funkiness so that you can wean yourself on to the style gently.

How Hall County retirement communities could be licensed to serve alcohol

Eggs: are they vegetarian?

Dry July is a chance to cut back on drinking, detox and gain control of alcohol consumption

TikTok Is All Over The Whataburger Half-Price Patty Melt Hack

Inflation is causing higher prices at the farmers market