The supervisors agreed to permit what are called “MEHKO” or Microenterprise Home Kitchen Operations, as a two-year pilot program allowing small-scale chefs to cook food for sale from their homes. 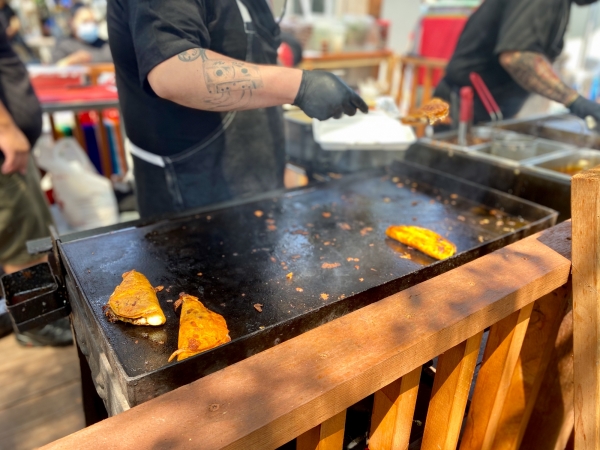 The owner of this home-based business in East Palo Alto sells tacos, burritos and other fare out of his backyard kitchen in 2020. Photo by Elena Kadvany.

The supervisors then went even further to support such operations, voting to allocate $238,000 in federal funds from the American Rescue Plan Act to cover the costs of the pilot program and an additional $62,500 in American Rescue Plan Act funds to create a grant program to help small-scale food entrepreneurs who were affected by the pandemic cover startup costs associated with becoming a MEHKO.

The grants will provide up to $2,500 to 25 people who attain permits to operate a MEHKO to help cover business start-up costs, including food safety training, advertising and marketing, and developing an online presence.

The application period is expected to open after Oct. 1, and eligible applicants will be selected at random.

In September 2018, Assembly Bill 626 (later amended in 2019) authorized home cooks to use their own kitchens to make small-scale, direct food sales to consumers. However, the law allows home kitchen operations only if the county authorizes them.

The Supervisors’ action to authorize these kitchens applies to all cities and unincorporated areas in San Mateo County.

Through the program, home cooks may make no more than 30 meals per day or 60 meals per week, sell no more than $50,000 in gross annual sales each year, and only sell directly to people. They may hold cooking classes or food demonstrations, and may prepare meals for pickup, delivery or for people to eat on-site.

They’re also permitted to operate outdoor cooking areas like a barbecue or wood-burning oven, and to employ up to one employee. They’re not allowed to advertise with signage, but can market via traditional or social media. The permits also come with required food safety training.

In a public comment, Alvin Salehi, cofounder of Shef, an online platform for independent chefs to sell their culinary creations directly to consumers, urged the supervisors to approve the legislation.

“Candidly, this is a lifeline,” he said, noting that about 85% of the cooks who use the Shef platform are people of color. Many cooks have had to work from commercial kitchens to prepare their products, which has created obstacles in their work, he said.

He added that there is already an informal network of people who sell food from their homes, but the practice is not regulated, and argued that introducing “well-informed regulations is safer than doing nothing.”

Several home chefs working with Shef said that they’d had to travel to commercial kitchens in San Francisco or San Jose to prepare their foods for delivery, and favored having the opportunity to cook from home instead.

The supervisors also voted unanimously to allocate an additional $500,000 in American Rescue Plan Act funding in grants to help “micro” food businesses that have been impacted during the pandemic.

The program will be administered by the San Mateo Credit Union Community Fund. Grants will be set at $2,500 for cottage food operators, $5,000 for caterers, food trucks and food carts and $10,000 for commissaries or incubator kitchens.

Eligible businesses need to have been operating before the start of 2021, have been negatively impacted by the pandemic, live in or operate in San Mateo County, have no more than five businesses within the county and comply with other regulations. They won’t be eligible if they’ve received grants from other county initiatives aimed at supporting small businesses or food enterprises during the pandemic.

Priority for the grants will go to applicants who have a household income at or below the area median income, which is $121,800 for a one-person household, according to a staff report.

People can learn more at smchealth.org or by emailing [email protected] The county’s Environmental Health Department also plans to host Zoom webinars and in-person presentations as well as provide multi-lingual information about the program in the months to come.

Please make sure your comments are truthful, on-topic and do not disrespect another poster.
Don’t be snarky or belittling. All postings are subject to our TERMS OF USE,
and may be deleted if deemed inappropriate by our staff.

See our announcement about requiring registration for commenting.

A Look at Its Full Value

These 4 Foods Are Most Likely to Cause Food Poisoning, CDC Says