Fairtrade has flown off supermarket shelves in the past year. Consumer appetite for products that carried the ethical stamp that total sales of Fairtrade products in retail even outgrew total grocery. In the 12 months to April 2021, value grew by 13.6% to more than £1bn, according to Kantar, compared with 11.1% for groceries overall.

It wasn’t the whole picture for the certification scheme, of course. Categories reliant on the out-of-home market, such as coffee, saw major declines overall as hospitality ground to a halt, points out Anna Barker, head of commercial partnerships at The Fairtrade Foundation.

Plus, growth in retail wasn’t just as a result of increased demand. A price hike in some commodities, including sugar, coupled with a scarcity of in-store promotions during the height of the pandemic also pushed up average prices by 22%. That drove value growth at a faster rate than volumes.

But, according to Barker, the willingness of consumers to pay a premium is proof the pandemic has delivered a real boost to awareness around the need for ethical and sustainable food and drink. “There is a higher awareness than ever of the impact of climate change, and of the challenges workers and farmers have faced,” she says.

So, what lies behind this shift in thinking? Is it a change for the long term? Or will ethics fall off shopping lists as restrictions ease and recession looms?

It’s clear the pandemic marked a turning point for some consumers when it came to ethical food and drink. By the end of 2020, a survey by analysts GlobalData found around a third of consumers (29%) said sustainability or ethical ingredients mattered more to them as a result of the pandemic, and 18% said supply chain ethics were ‘essential’ when deciding which products to buy.

“What this represents is a very large proportion that wants to do the right thing with their purchasing decisions,” says GlobalData analyst Ryan Whittaker. “This presents an opportunity to brands that prioritise ethical branding, sourcing and production.”

The pandemic brought home both the vulnerability of supply chains and the collective impact of purchasing decisions, believes William Sankey, research & editorial director at The Good Shopping Guide. “Since the pandemic, we have noticed a marked step-change in consumer attitude towards ethical products and companies applying for accreditation to show their ethical credentials,” he says.

“I think consumers have made the direct connection between the products they buy at the supermarket and their impact on animals, people and the environment. The pandemic gave everyone time to reflect on their consumption habits.”

That had a knock-on benefit not just for Fairtrade but for a number of other certification schemes, too. Take products certified as organic. They’ve seen their fastest year-on-year growth in 15 years at 12.6%, according to the Soil Association.

“Consumers have made the direct connection between the products they buy at the supermarket and their impact on animals, people and the environment”

The RSPCA Assured scheme, meanwhile, says continued growth means 12% of the terrestrial farming market in the UK is now accredited.

And a link between local produce and sustainability has also prompted three-quarters of consumers to call for greater choice from British farmers in supermarkets, according to a Waitrose report.

The hope is this spike in awareness will go some way to mitigate what has been a terrible year for many global producer groups. Three-quarters of Fairtrade wine in the UK comes from South Africa, for instance – but producers faced an export ban for many months in 2020.

Meanwhile, coffee producers faced a triple crisis of prices dropping amid the global closure of the hospitality sector, restrictions on their ability to produce and export amid social distancing protocols, and the impact of climate change. In Nicaragua, it’s thought Storm Eta, which hit the country in November, wiped out 30% of coffee crops.

So, if ethical certification schemes are to capitalise on rising consumer awareness in the longer term, there are issues around consumer trust and confusion that need to be addressed, believes Susan Nash, trade communications manager at Cadbury owner Mondelez.

“While the global pandemic has led to Brits being more socially conscious than ever before, Cadbury’s recent research has revealed shoppers are confused about what actions truly have an impact in everyday life due to the mixed messages around sustainability they’re encountering every day,” she says.

In fact, a survey of 2,000 shoppers by the supplier found just one in five were taking the time to look at the meaning of third-party logos and certification when choosing products.

Reports that many schemes were forced to switch to remote audits during the pandemic wouldn’t have helped alleviate uncertainty either.

But Barker insists this didn’t affect trust at Fairtrade. Though audits were carried out remotely where necessary, the organisation’s local networks meant “we were never left not knowing what was happening” she says.

“Some producer groups we work with have been stretched to their limit, and that makes it very challenging to meet high standards”

Anna Barker, head of commercial partnerships at The Fairtrade Foundation

Sankey echoes this. “While this has been an issue for some of the single-issue certification schemes during Covid, I don’t think this has changed consumer trust or confidence in ethical products. Consumers are probably more concerned about the ethics of their food supply in a post-Brexit market where individual trade deals may see a lowering of food standards and ethics.”

The far bigger risk, as Barker sees it, is that devastation wrought by Covid will see some products forced to opt out of Fairtrade. “Some producer groups we work with have been stretched to their limit, and that makes it very challenging to meet high standards.”

She predicts “producer groups having to decide whether or not to stay certified or just to make business-first decisions”.

Critical to that decision will be sustaining demand for ethical products, even where a price premium becomes less palatable in the face of economic challenges. They “will undoubtedly have an impact on people’s shopping decisions” says Bryan Martins, marketing & category director at Ecotone UK.

“We’re hoping the pandemic has enabled us to build back fairer, more resilient supply chains,” Barker adds. “It’s now inexcusable to ignore when farmers and workers don’t earn living incomes, have no safety net or wages to save for pandemics, or invest in agriculturally friendly practises. Our hope is that Covid has brought that home.”

It looks like the future of ethical goods is far from clear just yet. 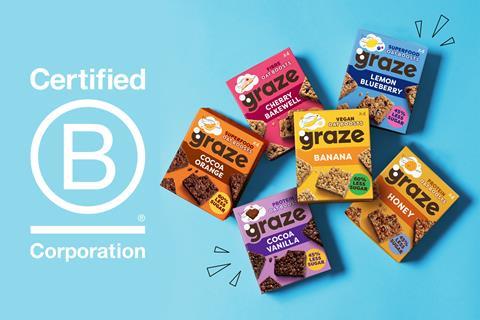 How does B Corp status add value to a brand?

After only five years in the UK, the B Corp certification scheme has attracted some of the biggest names in food and drink, such as Innocent and BrewDog.

In 2020, it added no fewer than 25 names to its roster of “businesses that meet the highest standards of verified social and environmental performance, public transparency, and legal accountability”.

But what benefits does the B Corp stamp of approval really bring to a brand?

According to a recent report by the organisation, certified SMEs in the UK recorded 24% median growth in turnover from 2017 to 2019. That compares with an average of just 3% for all SMEs.

Away from the top line, B Corp says its members report greater opportunities to collaborate and network, as well as a greater ability to engage employees and attract talent.

Plus, “with household names championing the movement, and B Corp shop initiatives from Ocado, Waitrose and Boots, there is growing awareness of B Corp certification with consumers” adds a spokeswoman for the certification body.

For Graze, one of the fmcg companies to become a B Corp in the past year, the certification marked a “milestone” according to chief brand officer Pia Villa.

“We’re really proud to have achieved our certification, as it gives us the external recognition of what we stand for as a brand,” she says”.

“We also understand how meaningful this certification is to shoppers as they become more inquisitive about the brands they buy from and what they stand for.”

To leverage this, the Unilever snack brand has made sure the B Corp logo is “easily visible” on pack and across campaigns.

This is echoed by one of the scheme’s longest standing members, Divine Chocolate. The brand “was early to the B Corp party” says sales director Jon Marlow.

“As a movement, B Corp is definitely increasing in awareness, and it’s a great way of being able to confirm to consumers we are a business that does things in the right way.”

Autism and Children: A Nutrition and Parenting Guide

Feeling like a stuffed turkey? NWI health experts offer ways to get back on track after overeating – nwitimes.com