What to cook when it’s 40 degrees

There’s nothing worse than trying to think about what to cook after spending a day moving around Cairo during a heatwave. Hi Summer! So now that the heat is here to stay, I tried to think of a few easy and fuss-free dishes that are fast, require minimal time sweating over a stove, and use the delicious summer produce that’s at hand now.

These three dishes are all vegetarian and could either be eaten as three separate meals or served together as one larger meal — great if cooking for a group during the upcoming long weekend. They could also work well served together with grilled chicken or fish.

I put together this recipe late one night recently using a few stray ingredients I had in my fridge and it turned out to be delicious. Any Italian reading should probably look away now, as I am about to do something quite blasphemous, which is mixing a green pesto-like sauce with ricotta cheese. I swear it’s good though, and it reminds me of a time I made a caesar salad in front of a few Italians who were horrified at my use of a sauce of goat’s ricotta and parmesan with lemon and anchovies. They threatened that they could not eat such a thing. Half an hour later they were cooing about how tasty it was and all was well. I think the same goes for this, as it sort of looks like molokhia that’s been tossed through pasta, but it really works, taste wise. 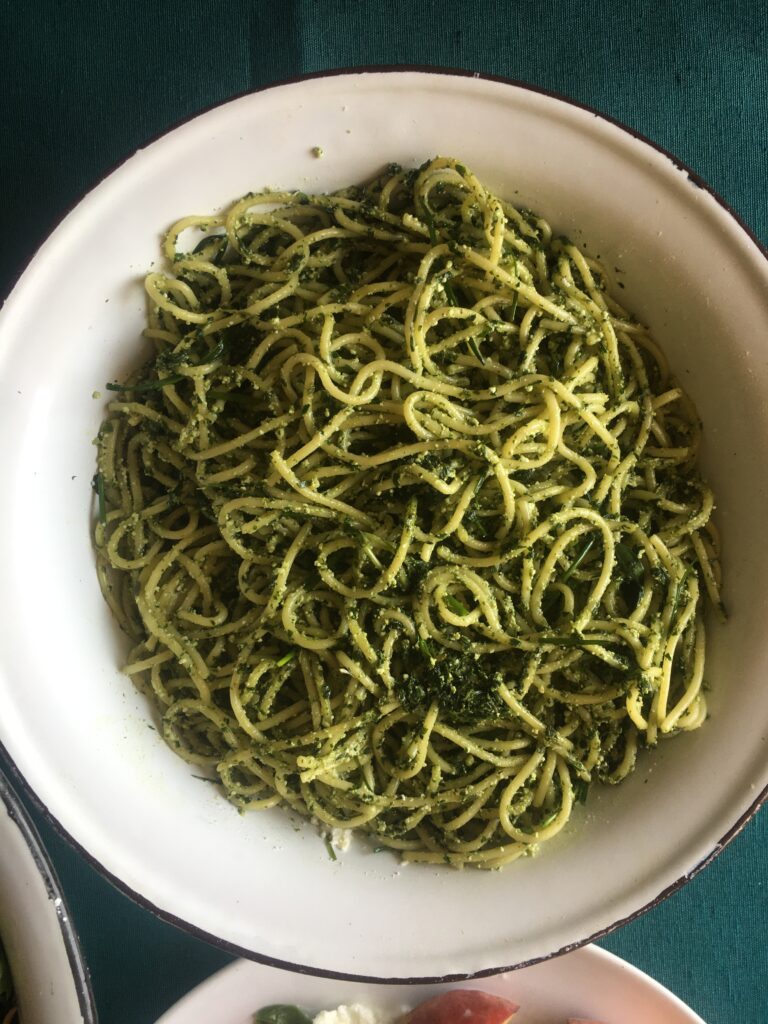 Zest of one lemon

Fill a large pot with plenty of water ( at least 3 liters) and place on a high heat to bring to an aggressive boil. Meanwhile, separate herb leaves from stems and place in a bowl. Using the back of a knife or mortar and pestle, crush the garlic. Add to herbs along with a large pinch of salt and then, using a hand blender, start pulverizing the herbs. After they start to liquify add the oil gradually while the blender is still running. Then set aside. (You can add more oil if it looks like it needs more loosening.)

In a separate bowl, add ricotta, a teaspoon of salt, the parmesan and chives and then grate the lemon zest directly into the bowl. Mix thoroughly with a fork until all combined.

Once the water is boiling, add 2 tablespoons of salt to it and the pasta. Cook the pasta until it’s al dente (around 10–11 minutes). Don’t stir the pasta more than once while cooking so as not to release too much starch and end up with clumpy noodles. Once it’s ready, drain and immediately stir into ricotta mix, tossing so it’s all coated with cheese. Spoon over the green sauce and toss gently through also until well coated. Serve on plates topped with a little extra parmesan and a few basil leaves.

Tip: Make sure that all your herbs are very fresh and thoroughly dried before using so you don’t end up with a watery or slimy sauce.

Fattoush is a timeless Shami classic for summer and all seasons generally. Many different versions exist across the Middle East region, but I think this one, adapted from an Ottolenghi recipe for spinach salad, is a step up because it has this nice contrast between vinegary onions, crunchy, buttery nuts, and bread, that gets complimented by the unexpected sweetness of dates.

Quickly pickling the onions is a hack you can use in other salads, as it takes the edge of the usual pungent acidity of onions that some people don’t like, and it’s also a bit less harsh for those whose stomachs get aggravated by eating raw garlic and onions. 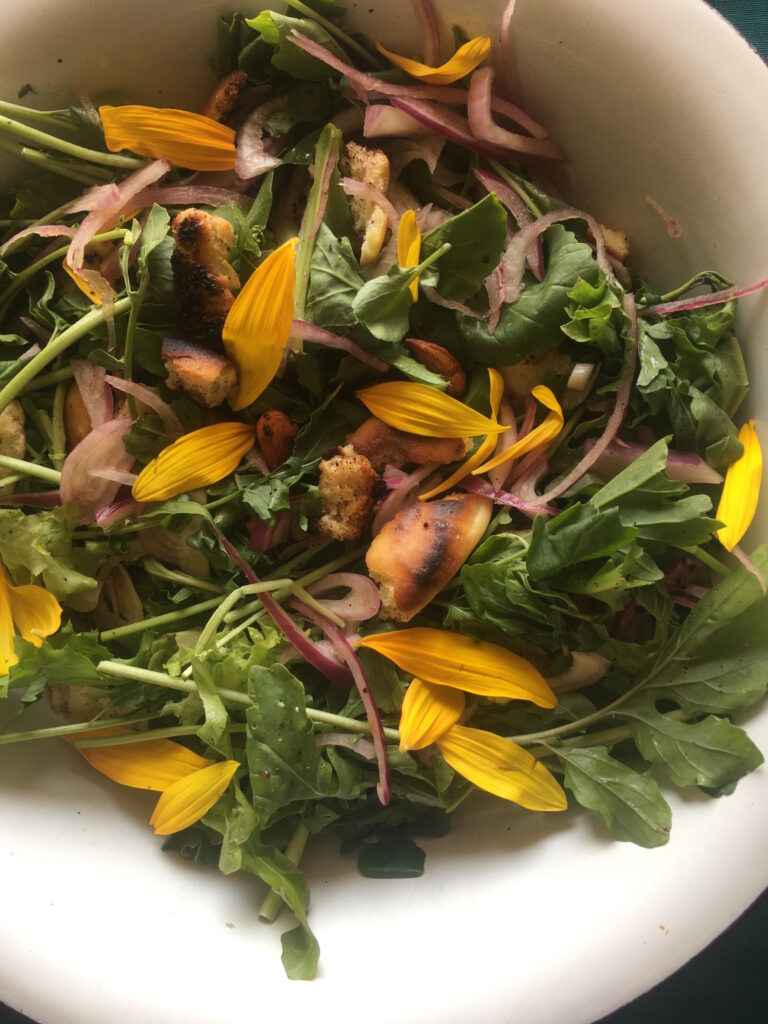 Take the sliced onion, vinegar and dates and put into a bowl with a little salt. Leave aside to marinate for 15–20 minutes.

Heat half the oil and butter in a frying pan on medium and add the bread and almonds and cook on medium heat for around 5 minutes until all golden and crunchy. Then take off the heat and mix in chilli, sumac and ½  a teaspoon of salt. Toss well and leave to cool.

When you are ready to eat, toss the arugula with the pita mix, discard the liquid from the onion, and then mix with leaves and pita. Add remaining oil, lemon juice and a little salt until it’s seasoned to your liking.

Tip: Make sure here to also wash and dry your arugula well before using, to avoid a watery salad and soggy, fried bread pieces.

I like a salad like this as an appetizer, because it’s so easy you can make it at the table while talking to people. All you need to make it work is the juiciest of summer peaches. 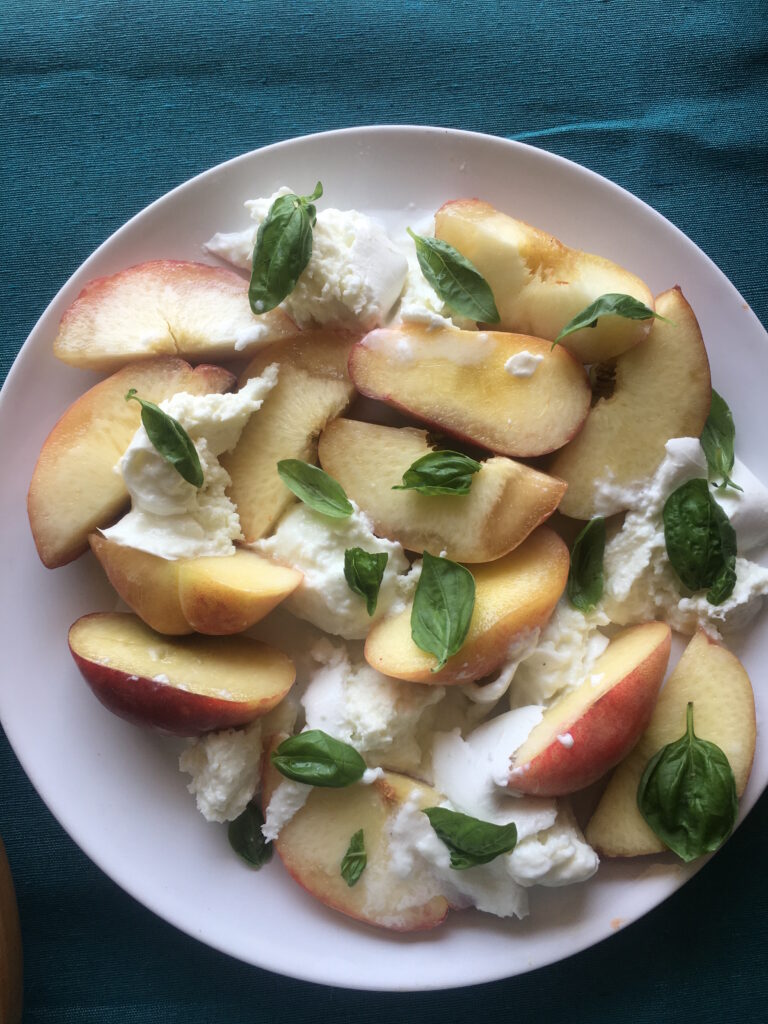 A teaspoon of honey

A large ball of mozzarella or other soft cheese

Cut the peaches into quarters, removing the pits. Rip up mozzarella and arrange on a plate. Whisk together the oil, salt, pepper and honey until the honey is dissolved. Arrange peaches over mozzarella. Drizzle with dressing and dot with basil leaves.

Tip: Make sure the peaches are super ripe and don’t store them in the fridge for maximum flavor.

For a weekly playlist that complements each recipe we publish, head to Mada Masr’s Spotify account

Cooking with a conscience: Time to reduce food waste